Q: What Is dyslexia? A: Dyslexia is a specific learning disability that is neurological in origin. The definition of Dyslexia by The International Dyslexia Association (November 2002) states that:

“It is characterized by difficulties with accurate and / or fluent word recognition and by poor spelling and decoding abilities. These difficulties typically result from a deficit in the phonological component of language that is often unexpected in relation to other cognitive abilities and the provision of effective classroom instruction. Secondary consequences may include problems in reading comprehension and reduced reading experience that can impede growth of vocabulary and background knowledge.”

The National Institute of Child Health and Human Development (NICHD) also use this definition.

Dyslexia is a type of specific learning disability that causes difficulty mainly with reading, but also with writing, spelling and word pronunciation. Other difficulties may include problems with the memory and processing information. This means they may have problems remembering and blending sounds when reading, recalling information and familiar words and following multiple instructions. Things may not be automatic for them and they have to concentrate on the task at hand. Dyslexia is a life-long condition and affects 3-10% of people. There is also a genetic link to dyslexia, therefore it can be inherited.

People with dyslexia have been shown in studies to use a different part of their brain in the process of information. Many people are also shown to have intelligence which is average to above average. 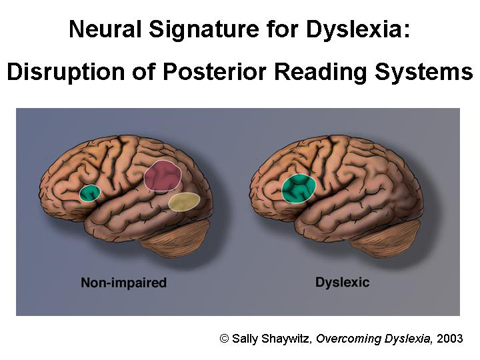 Brain scans revealed under activity in centres towards the rear of a dyslexic’s brain when they were challenged in a reading test. A region toward the front of the brain was overactive but didn’t perform well.

The findings provide dramatic evidence that people with dyslexia are not poorly taught, lazy, or stupid, but have an inborn brain abnormality that has nothing to do with intelligence, say the scientists from Yale School of Medicine.

Many people with learning differences of dyslexia are capable of some extraordinary thinking and can be extremely successful, once they learn some management strategies. This is why we prefer to call them, more appropriately, Creative Thinkers. Some of their strengths include:

Famous people with the gift of dyslexia

There are thousands of very successful people in life living with dyslexia. Millions around the world learn to manage  and understand who they are and how to adapt to their situations. Some famous people with dyslexia include:

Please feel free to contact me if you would like more information about Dyslexia tutoring or tutoring for other Literacy learning needs and ways best to support your child.